During the month of August I again stood next to a deathbed. It was next to the deathbed of one of our patients.

I was touched by the absolute outpouring of love from the family to the patient. I have seen it at almost every single deathbed I have stood next to…. The second death I ever witnessed was weeks before my mother-in-law died. My Mother-in-Law was in a hospital. The lady opposite her was dying and moved into a dying-room. I was allowed to sit with her. I prayed for her and tried to comfort her. I spoke to her almost non-stop for 11 hours. In the evening her husband came to visit. He was not told that his wife was dying by the hospital staff…

“What is wrong with my wife?” he asked

“She is very ill” I said

“When will she come home?” she asked.

“You must speak to the staff” I said

“They say nothing” he said

I know it was not my place to tell this poor man that his wife was dying. But, if I hadn’t he would have had to live with the fact that hours after visiting hours were over, she died… He got to say goodbye.

I sat with the woman until she died. She was petrified of death. I could see that they were indigent people. Poorer than poor.

In the heat of the moment I promised her I would help her husband look after her children… I made a deathbed promise.

The next day I tried to get her family’s contact details from the hospital. They refused to give it to me.

I have had to live with the fact that I promised a dying woman that I would take care of her children and that I broke that promise.

Extravagant promises to dying loved ones often pose an ethical conflict, defined as when opposing acts each fulfil an ethical value, but neither can achieve both.  The situation also arises when one is tempted to lie to dying friends and loved ones out of kindness. A mother and daughter are involved in a fatal car accident; the daughter is dead, the mother is dying. “Is our daughter all right?” the fading mother asks her husband.

In such a case, it is reasonable and ethical to conclude that the kind answer, “Yes,” is more ethical than the truthful answer, “No.” A promise to a dying loved one may be an exception to the usual rule that it is unethical to make a promise one cannot or will not fulfil.

Often ridiculous and selfish promises are coerced from the loved ones standing next to a death bed. When we stand there we promise freely…we want to give the dying person that final peace of mind.

A classic example of a deathbed promise made in good faith is depicted in the black comedy “Where’s Poppa?” In this movie, the son promises his father, he would never place his senile mother in a home… At the time it was a reasonable promise but becomes increasingly more difficult to keep as the mother becomes more demented and senile. The vicious woman destroys every aspect of his life….

“Promises openly and freely made on the initiative of a dying individual’s loved one are true commitments. Promises coerced by a dying friend or relative and made out of kindness or guilt, on the other hand, should be re-evaluated at a less emotion-charged time. Both varieties of death-bed promises, however, create ethical obligations. They just can’t be as strong as the obligations created by promises to the living.”

I have stuck to every promise I made Vic. Many of the promises were heartbreakingly difficult to keep. Others were easy.

On Wednesday the 9th of October 2013 we had the official opening of Stepping Stone Hospice’s building. 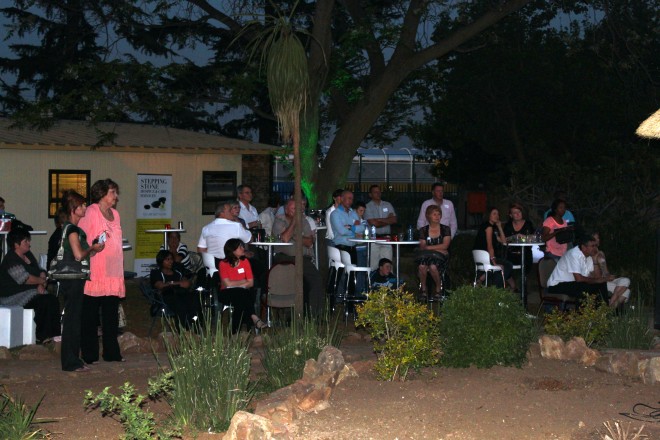 It is one promise I was able to keep.