Fiercely protected by Aurora throughout childhood, Emma runs into resistance from her mother when she marries wishy-washy college teacher Flap (Jeff Daniels). Seventy five minutes into the movie Emma discovers that she has terminal cancer. http://www.rottentomatoes.com/m/terms_of_endearment/

The final third of the movie is about Emma dying and the family’s journey coming to terms with it.

Aurora, the mother, is a sharp-tongued, controlling mother who is fiercely protective of her only daughter.  Emma, the daughter, is a rebel…  Just like Vic and I were.

I was distraught, like Aurora, when I found out Vic was pregnant.  I hated the foetus that was growing in her body… I knew it could kill her.  The second I lay eyes on Jared, I experienced a rush of love that has never been equalled…Don’t misunderstand me – I love all my grandchildren equally.  But, when I first saw Jared I knew I was capable of perfect love.

Aurora grows to love her grandchildren with that perfect love.

Aurora and I are not the touchy types.  Vic and Emma would hug and hold on forever.  I was often uncomfortable with the “excessive” display of emotion.  Vic and I always held hands but I get uncomfortable with long hugs….being that close to another person for a “long” time.  Vic thought I was the worse hugger ever.  There was a day that Vic said “You have not gone all stiff Mommy.  That was a perfect hug.”  In the movie there is a scene where mother and daughter hug.  Emma Horton says: “Momma, that’s the first time I stopped hugging first. I like that.” 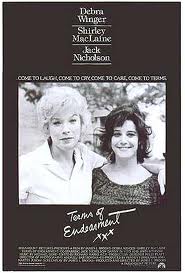 Then of course there is the dreadful hospital scenes where Emma is in so much pain.  Aurora is calm, matter of fact and placating when she talks to her beloved daughter.  She loses her calm exterior the minute that she walks out of the room into the nurses’ station.

Whilst I was with Vic I smiled, I encouraged and placated…the minute I walked out of Vic’s hospital room God help the sister or doctor I got hold off…  Doctors made U-Turns when they saw me waiting for them; Brendan actually said he was scared of me and would not want to bump into me in a dark passage.

But that is what Mother’s do.  We fight for our children.  We protect them at all costs and with total disregard to the rest of the world.

Living with a terminally ill child is devastating.  I wanted to fold Vic into my arms, lock out the world and the disease, and protect her from pain.  In the real world we fight with our dying child to keep on fighting, look after themselves, to do what we believe is right… We fight for them, with them…..We fight for their lives.

This fragile balance and relationship is beautifully depicted in Terms of Endearment when the mother (Aurora Greenway) says: I just don’t want to fight anymore.

Emma Horton: What do you mean? When do we fight?

Aurora Greenway: WHEN do we FIGHT? I always think of us as fighting!

Emma Horton: That’s because you’re never satisfied with me.

Vic often used similar words.  She would never “space” herself.  Half a breath of oxygen in her lungs and she was driving and organising a party.  I would fight and remind her that driving (under the influence of humungous quantities of morphine) invariably lead to a fractured vertebrae or two…

“Don’t fight with me Mommy” she would say.

The most moving scheme in the movie is when Emma says goodbye to her sons.  In the two years, before her dying, her eldest son had withdrawn from her.

Emma Horton: I know you like me. I know it. For the last year or two, you’ve been pretending like you hate me. I love you very much. I love you as much as I love anybody, as much as I love myself. And in a few years when I haven’t been around to be on your tail about something or irritating you, you could… remember that time that I bought you the baseball glove when you thought we were too broke. You know? Or when I read you those stories? Or when I let you goof off instead of mowing the lawn? Lots of things like that. And you’re gonna realize that you love me. And maybe you’re gonna feel badly, because you never told me. But don’t – I know that you love me. So don’t ever do that to yourself, all right?

Vic was so worried about Jon-Daniel.  He withdrew during her very ill spells.  I remember the one night when she crawled into bed with me.  She was crying bitterly.  https://tersiaburger.com/2012/05/23/23-5-2012/  She spoke about how Jon-Daniel would suffer from guilt after she died.  “Tell him I say thank-you for making me laugh”