Chaka’s Rock is a quaint coastal town on the North Coast of Kwa Zulu Natal.

We have come to Chaka’s for the past 22 years.  Vic loved Chaka’s with a passion and always said that she started missing Chaka’s from the second we packed up until we set foot here the following year.

Through every possible circumstance Vic made her way to Chaka’s – with the exception of 2012.  Last year she said “Mommy, I am not going to make it to Chaka’s this year…” 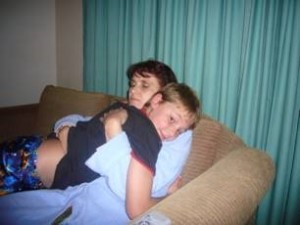 In 2007 Vic had 18 abdominal surgeries.  She developed septicaemia and contracted every superbug in the book.  She was on life support on more than one occasion.  Her kidneys and lungs failed.  Vic developed an intestinal fistula.  It was a high output fistula and she lost up to 7 litres of fecal matter through the fistula daily.  The poor poppet walked around with a machine that acted as a “catchment” for the fecal matter.  Vic was on TPN (Total Parental Nutrition) and not allowed to eat anything.  Her stomach had a gaping wound with fecal matter pouring out of a hole in the intestine.

Vic spent the majority of the year in hospital and reached a stage where she appeared to be like a “lamb being led to slaughter”.  It was such a concern to us that she appeared to have lost her will to live.

It was such a tough decision to make whether we should discharge Vic from hospital to make the trip or not.  The doctors had different views on whether we should go or not.  Two of them felt it would be emotionally uplifting for her to go and a third thought we were “absolutely nuts!”  I am so grateful that we decided to go ahead with our annual pilgrimage, as Vic was able to spend such precious time with us.  Even the bad weather worked in our favour and we spend wonderful days playing Bingo and Trivial Pursuit.

It was extremely difficult to manage Vic’s health in accommodation other than a hospital.  Changing the TPN was a sterile procedure.

On Friday morning, the 29th of June 2007, Vic collapsed was admitted to the ICU at the Albert Luthuli Hospital in Chaka’s Rock.  Vic was transferred back to the Donald Gordon Hospital by ambulance on the Saturday afternoon.

In a “Get better soon” card that her boys wrote her after our little holiday they thanked her for the most wonderful holiday ever!  Certainly, we had had “better” holidays in our lives but the time that we spent together was so precious.

Vic was only released from the Intensive Care Unit of the Donald Gordon Hospital on the 23rd of July 2007. 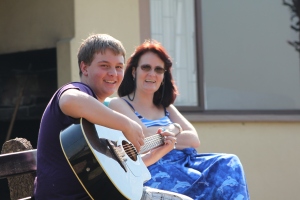 In 2010 I only spent a weekend in Chaka’s with Vic and the boys as I had to fly to the Middle East on business.  .  Lee drove the boys back and Vic flew home.  This is an excerpt out of an email Vic sent me…

“Hi Mommy, boys are great… We had such a great evening last and day today… Jared had Tyron over to visit. We all miss Mommy already!!!! We really hope it goes well there!!! We are all holding thumbs and saying big prayers… Battling with the authorisation for the pain Infusion still. I think I broke another vertebrae on the flight back from Chaka’s. We had a bumpy landing and I am battling to breathe from the pain… I think it’s two above the last fracture.  Can’t believe how much I miss Mommy already.                                    We are all trying to think up a name for Gramps’ new puppy… J-D is still sulking, because I won’t carry her around like Gramp’s does. Can you believe it? Jared said that when we were all in Chaka’s, she didn’t need legs as Gramps’ just carries her everywhere. And I don’t know what she was eating at Moms’ but I know it wasn’t her food, she refuses to eat it, she was so spoilt Jared reckons she lived on sweets and Gramps’ food…                          I wish we were all still in Chaka’s, it was really great to spend the time with Mommy… 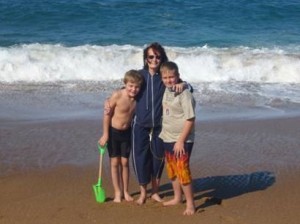