It was a horrible time of our lives when Vic started going to the Pain Clinic.  Her pain was out of control – or so I thought.  It was actually just “preparation school” for what was yet to come….  I was mortified that she was on 600 mg of morphine, a week…. When Hospice accepted Vic onto the program in 2013, a mere 9 years later, she was already on 600mg of morphine, twice per day.

Vic needed to consult with an anaesthetist, specialising in pain control, on a monthly basis.  He would examine her and re-evaluated her pain medication. We need an original prescription for morphine. It was one of those dreadful experimental phases of her life.  But, bad things lead to great things…

The Pain Clinic was situated in an élite part of our city.  It was a mission to get to it and took many hours out of a day.

“If you wish to remember me, do it with a kind deed or word to someone who needs you. If you do what I have asked, I will live forever.”

This particular day Vic was in terrible pain, and it was difficult moving her from the car into the wheelchair.  Her beautiful eyes were dark from pain and filled with tears. I remember thinking “How tiny and sad she looks”… 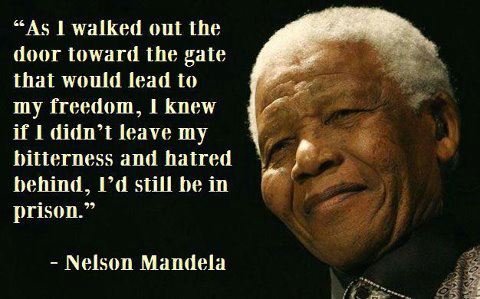 We stood waiting for the elevator. It felt like a lifetime.  All I wanted to do was get Vic into the consulting rooms so she could get a booster shot of morphine. I was getting quite impatient, with the delay of the lift, when it started moving down.  I noticed quite a build-up of people on the outer periphery but did not pay too much attention to them. I was totally focussed on my child’s pain and discomfort.

The door opened.  Two tall men, wearing sunglasses, walked out.  There was an audible gasp in the hall.  The greatest statesman in the world, Nelson Rolihlahla Mandela, stood behind them.  He was so tall! In total awe I moved Vic’s wheelchair back clearing the way for this amazing man.

He walked out of the lift and walked towards us.  He stood in front of Vic. He stooped down, stuck out his hand, and said “Hello my dear.  How are you?”

“I am fine thank you Mr President,” Vic said

“I hope you feel better soon,” he said in his beautiful, raspy yet gentle voice.

He greeted me, still holding her little hand.  I will never forget his gentle eyes.  He had an aura of greatness.

Vicky and Nelson Mandela – Two great warriors locked in a moment of kinship.

“Goodbye” he said and walked away.

I know that Vic and Nelson Mandela will meet, again, in Heaven…  I believe that the two brave souls will recognise one another.  This time there will be enough time for them to linger and chat.  The people they are it will be about their loved ones, the grace they experienced in their lives… I know they will not discuss the hardship, pain or suffering they lived…

Two incredible people… Nelson Rohihlahla Mandela and Vicky Bruce.  Heroes of many… two people who made a difference, through their suffering; their bravery and inner strength.