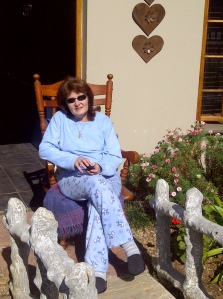 Vic basking in the winter sun!

Sunday was an amazing day.  Lorraine, my sister, came to visit and it was great having adult company that discussed more than pain control, bowel movements and vomiting.

Lorraine moved a chair into the sun for Vic.  Vic sat basking in the winter sun sipping lots of coffee.  In true form, Vic on her occasional good day, pulled the dam from under the duck.  She was like a little jack-in-the-box.  Needless to say, I was a spoil sport as I kept begging her to slow down…She did at 15:00 when she literally crashed.

Vic sobbed from pain and my poor sister wasreduced to tears.  She is not used to facing the raw pain of a terminally ill patient who breaks through her pain threshold!

Vic dozed on and off  but kept waking from the pain.  Maybe she took some extra painmeds because she seemed disoriented?  Both Danie and Lorraine expressed their concerns that she seemed to have totally lost track of time and events…

Sunday afternoon the boys came home after spending the weekend with their Dad.  Danie took Jared and Kirsten, (Jared’s girlfriend), to church.  Vic kept trying to get out of bed.  She is so darn stubborn.  She hardly ate any dinner so I gave her anti-nausea tablets and only half her normal pain medication.  She kept getting out of bed.  She would just not stay in bed.

I got so angry with her that I said I would fetch Jared from church.  I needed to remove myself from the situation.  Lorraine said “let me stay with Vic” and I said “No!  Come with me”

At home she was lying in a crumpled little heap full of blood and screaming from pain.  Jon-Daniel, bless his heart, was lying next to her on the bed trying to comfort her.  Vic went hysterical when I said I was phoning an ambulance.

We agreed that we would try to get her to hospital in my car.  Jared half carried her out to the car and then the drama began.  We could not swing her legs into the car!  She was screaming with agony.

I phoned the ambulance service but when they arrived it was obvious that they could not lift her onto the spine board and/or bed.  Eventually we repositioned Vic in the car.  Jared sat behind her and cradled her in his arms.  The ambulance escorted us to the hospital.

At the hospital it took at least 15 minutes before the Trauma and Medics staff decided how to move her into the Trauma Dept.  Vic screamed and screamed with pain!  From 21.30 to 03:00 they x-rayed and scanned Vic.  Most of the x-rays were done in the Trauma section.  Vic’s pupils were very dilated and she was VERY confused so they also ran a CT Scan.

If I was ever given the opportunity to erase 30 minutes from my life it would be the 30 minutes that it took to move Vic from the ER bed onto the scanning table and back, straightening her legs and forcing her to lie on her back…she screamed and cried “Mommy help me, Mommy!!!  Mommy!!  Mommy help me!!!”

The diagnosis – “impacted fracture of proximal metaphysis of right humerus”.  Vic was admitted to the orthopedic ward and scheduled for surgery today.  The orthopod decided that she is too frail and the risk of the sepsis spreading from the spine and abdomen to the arm,  too great, for him to “pin” the arm.  So Vic’s arm is in a sling and will mend, albeit crooked, eventually on it’s own.  She also has a displaced fracture of the fibula, posterior malleolus, (I believe these are all ankle fractures and Lanie, a physiotherapist says if she had to choose a fracture it would be these fractures), an avusion fracture of the calcaneus and several vertebrae …The spine…well what is to do?  Pain control, bed rest…  Oh, did I mention that the staff had mobilized Vic and she had WALKED on her broken ankle because no-one read the X-ray reports???  I only picked it up when I read the reports this afternoon!!!!  I had to report it to the nursing staff!

I would like to point out that this is in a Private Hospital….can you imagine what happens in Government Hospitals?

I am so angry with myself.  This happened because I got angry with Vic.  I should have stayed with her and not reneged my Caregiving duty.  I should have had been there to bulldoze my stubborn child into remaining in bed.  My temper has caused Vic endless, unbearable pain.  Who knows how long it will take her to recover from this trauma…if she indeed ever recovers from this!  I will never forgive myself for this!

Well with the bad comes the good as well.  We have dreaded Jared’s surgery on Wednesday as we know Vic would have insisted on trying to sit at hospital all day.  Actually, the whole week!  Problem solved.  She is too sore to move… And will more than likely still be in hospital on Wednesday.

The nurses just changed her bed linen and she screamed with pain!  How are we going to take care of Vic at home?  My sister offered to come through but two  qualified nursing staff could not move her without causing major distress.  She also cannot walk and needs to be “bed-cared” for. …bed baths etc, etc, etc 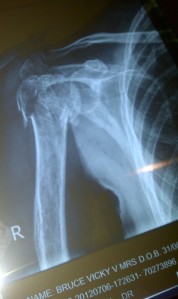 
Two weeks after our arrival in Johannesburg we celebrated Vic’s 3rd birthday.  Tienie drove my car up and was able to be with us for Vic’s birthday.   By her birthday Vic had 38 fractures.

The day of Vic’s birthday Tienie and I went for a drive looking for an ice-cream parlour as a birthday treat for her.  Vic was sitting on the backseat.  Cars did not have safety belts in 1977… a dog ran across the road, and Tienie swerved out to avoid running it over….. Vic fell off the back seat.

I immediately knew her little arm was broken.

We drove to the nearest hospital.  It was Vic’s first visit to an Emergency Room in Johannesburg.  There was a long queue of patients waiting to be seen.  I completed the paperwork and we sat down for the long wait.

Vic being a toddler we got moved to the front of the queue.  A tall, tired looking doctor took down Vic’s medical history.

I remember thinking “Duh….. You know there is no treatment.”  But, then a spark of hope flamed up and I asked “Do you know of treatment for Osteogenesis Imperfecta?”

“Vicky is having experimental homeopathic treatment.  The physician treating her is Professor Majorkenis” I said

He looked at me and took out a red pen from his pocket.  In huge red letters he wrote “Homeopathic treatment” across the page.  He drew two lines under the words…

In a terse voice he instructed the nurse to take us through to X-rays.  There was no radiologist on duty, and we had to wait for the call-out radiologist to arrive.  I eventually went through to the ER and asked the doctor whether Vic could have something for the pain.  It was 2.5 hours after the event, and she was crying from the pain.

“She cannot have anything for pain.  She may have to go to the theatre.  But then you know that don’t you?” he asked in a very sarcastic tone of voice!

I went back to X-rays seething but knowing that what he said was true.  If the bone had dislocated Vic would have to go to theatre.

By the time I got back to X-rays the radiologist had arrived and was busy setting up the machine.  Vic’s cries of pain are still etched into my heart and brain when her little arm was positioned on the table.  Tears ran down my cheeks whilst I kept telling her that if she kept still it would be over soon.

The X-ray showed 3 clean fractures.  No surgery would be necessary.

We went down to the ER, and the doctor started applying the plaster-of-paris to Vic’s arm.  She was sobbing with pain.

I absolutely lost it.

“If you have a problem with the fact that my child is having homeopathic treatment you take it out on me. “

He just fixed his tired eyes on me and said nothing.

“Do you know what it feels like when your child is sentenced to death and there is no appeal system?  Western traditional doctors, like you, have offered us no hope what so ever!  This Homeopath is prepared to TRY.  That is a hell of a lot more than what doctors like you are prepared to do! ”

His eyes were big and he had stopped working on Vic’s arm by then.

“Now, if you have a problem treating my child with the care and dignity that she deserves I suggest you get someone else in here to take care of her!”

He drew up a syringe with some pain medication and said “This will just sting a little, but it will help for the pain…”

He gave it a couple of minutes and then completed the plaster-of-paris process.

Without a word of apology he wrote a prescription for pain medication.  He curtly said “Take her to her orthopod in three weeks” and walked out of the cubicle…

I lodged a formal complaint against him the following day, but nothing ever came of it.

Was I surprised?  Hell no!  Homeopathic or alternative medicine was satanic in 1977 in South Africa!  We would go to hell for it any way…

The focus today was Hospice.

The physician came in today and suggested that once Vic is well enough to be discharged we should have her admitted to a Step-Down facility.  A Step-Down facility is an in-between Hospital and Home facility…How wonderful would that be!

Well, the meeting with Prof Froehlich went quite well, if she keeps to her commitment!  She will engage in a discussion with the Pain Clinic’s Social Worker and Home Nursing Representative who deals with Hospice.  I also got a letter from the Physician and Orthopod treating Vic at the Union.  I will submit these letters to Hospice and if they refuse to treat Vic I will take them to the Constitutional Court.  So help me God I will not give up!

Jon-Daniel posted on his BBM status that “No child should ever hear their mother cry from pain”.   No child should have to.  I know that Sunday evening’s fall (Hero to Zero) will haunt the boys and me forever!

Vic is just a bundle of pain today.  Danie sat with her whilst I was at the Pain Clinic.  We insisted that the boys go to Gold Reef City as planned.  Jared needs to get his mind off his operation and Jon-Daniel needs to be with his big brother.  They were traumatized by Vic’s fall.  I hope they have a wonderful day!!

Tonight we planned on taking them to dinner as it would the last good meal that Jared will have in many months!  Maybe I can find someone to sit with Vic. Jared’s surgery is major.  It is to repair an underdeveloped reflux valve, hiatus hernia and creating a junction to tummy due to scar tissue formed from burning.  I have a lot of confidence in the specialist surgeon.  My biggest concern is how I am going to keep Vic in bed…Fortunately they will both be in the same hospital!

I am so tired.   I have slept in a chair at the hospital and have no intention of leaving until Vic can cope without me.  Hospitals are noisy and Vic is in so much pain when she moves!!